Business leaders and policymakers said today that top priority must be given to bringing corporate social responsibility practices in line with global climate targets, and by doing so, this will create valuable opportunities for all.

This was the conclusion of the technical webinar ‘Race to Zero: Meet the World’s Race to Zero Heroes for Climate Action’ including more than 400 public- and private-sector representatives from across the region, held as part of the #RaceToZero global dialogue, and ahead of a major UN Climate Change Conference, known as COP26, in November.

Global Compact Network Thailand (GCNT) co-convened the event with the UN Resident Coordinator Office in Thailand, UNFCCC/IGES Regional Collaboration Centre for Asia and the Pacific (RCC Bangkok), and the team of UN High-Level Climate Action Champions Gonzalo Muñoz and Nigel Topping. Its purpose was to help businesses take transformational action in setting climate targets by bringing together experts, sharing best practices, as well as providing tools to help them achieve a net-zero transition. 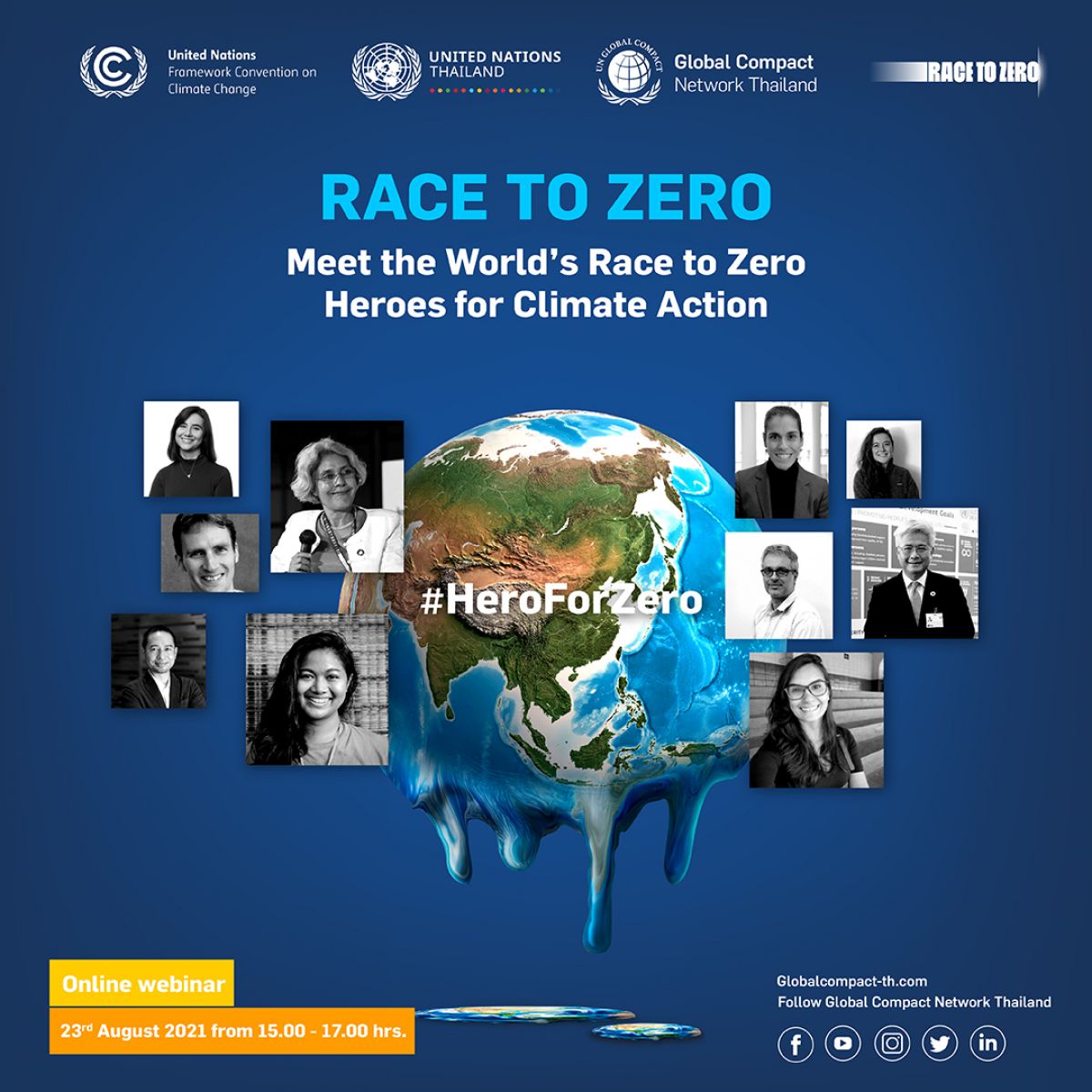 Noppadol Dej-Udom, Chief Sustainability Officer, Charoen Pokphand Group Co., Ltd. and Secretary General of GCNT, said the event will help build momentum for the GCNT Annual Forum in October, which will take place under the theme ‘Coping with Climate Change.’ He said the private sector must step up against climate change, citing for urgency the latest Intergovernmental Panel on Climate Change (IPCC) report that the UN Secretary-General has called a “code red for humanity.” Business-as-usual was no longer an option – and that is why GCNT has made building climate preparedness and adaptation among its members a top priority, Noppadol said.

“We have seen how much effort Thai businesses and all sectors of society have put towards coping with the COVID-19 pandemic.  I strongly believe that to tackle the ongoing climate crisis, we will need even more effort, more commitment, and more actions.,” he added.

According to Deloitte’s Global Survey conducted earlier this year, 80 per cent of business leaders expressed concern about climate change, the majority acknowledging that the world was at a tipping point, hence demanding collective responsibility to mitigate the consequences of increased emissions.

On this front, Gita Sabharwal, UN Resident Coordinator in Thailand, explained that the private sector, which generates nearly 9 in 10 jobs and contributes to over 80 per cent of the country’s GDP, has an undeniable leadership role and responsibility. Although traditionally environmental spending is seen as a cost burden to the economy, a recently published IMF Paper suggests that green spending can be a green multiplier contributing to anywhere between 2 to 7 times more than conventional multipliers. This is precisely why it is so critical to create an enabling environment for a green economy and business sustainability, she added.

“I am pleased that the private sector in Thailand is taking such bold initiatives to be climate champions, with some companies already aiming to be carbon neutral over the coming decade,”
she said. “With leadership from the private sector in setting climate targets, it will inspire all of us to be more ambitious ourselves, including our governments. What is clear is that we must champion the cause of the planet together. The solution requires action from all of us together.”

Jens Radschinki, Regional Lead of UNFCCC/IGES Regional Collaboration Centre for Asia and the Pacific (RCC Bangkok), said this year will see countries embarking on their post-2020 climate action, including reducing national emissions and adapting to the impacts of climate change as part of their Nationally Determined Contributions (NDCs). The tasks ahead are enormous, and the private sector is a critical player in accelerating the global decarbonization to achieve net zero emissions by latest 2050.

“Ambitious government commitments and country action is needed,” he said. “To be consistent with 1.5-degree goal, the global GHG emissions need to decline by around 45% by 2030. Ahead of us lies a fundamental transformation of our economy, and private sector needs to play a key role in setting science-based targets to reduce GHG emissions.”

Participants also heard from climate experts, including from the Science-Based Targets Initiative and Business Ambition for 1.5°C campaign, who explained new commitments or action plans for achieving net-zero emissions, as well as the three UN-backed ‘Race to Zero,’ ‘Race to Resilience’ and ‘Glasgow Financial Alliance for Net Zero’ initiatives.

Businesses need a common baseline to keep their climate goals in reach, acknowledged Race to Zero members Moh Suthasiny from Happy Grocers and Dan Pathomvanich from NR Instant Produce PCL, as they shared about their zero emission targets, on how to keep raising ambition, and to deliver on it through concrete action.

United Nations in Thailand: The United Nations works together with the Royal Thai Government and people of Thailand for over fifty years to support inclusive and sustainable development, based on national priorities and plans. The United Nations Country Team consists of 21 UN agencies who have specific programmes and activities being carried out in Thailand. Our work is supported by the invaluable partnerships we have with the Royal Thai Government, national stakeholders, civil society, academia, the private sector, donors and the media. We also work closely with the UN Economic and Social Commission for Asia Pacific (ESCAP). For more, visit https://thailand.un.org 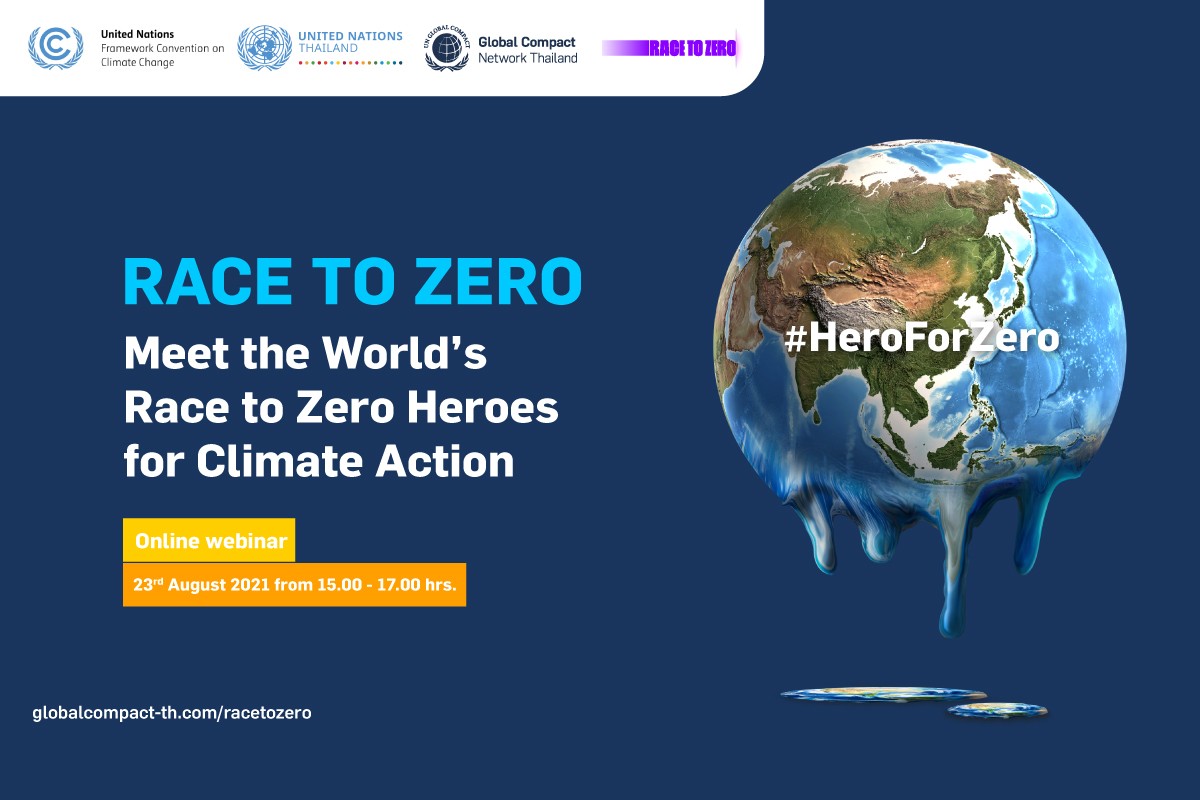